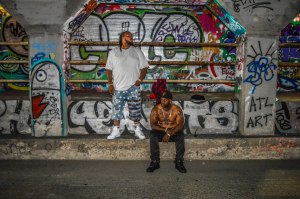 Dom was born in Carbondale IL and raised in Atlanta GA. Yung O was born in Oakland CA and raised in MO. Both rappers moved around a lot and met in Springfield MO in 2014.
After hearing about each other they met in the studio and recorded the remix of (Shy Glizzy’s Awesome). From there the two rappers built a bond doing music together off and on throughout 2015 often performing at the same events. It wasn’t until the Summer of 2016 when they took a trip to Atlanta together that they then formed the name (LitGang). Dom’s brother Grip, mixed and mastered the groups’ music and LitGang dropped their first hit single “Lit”. The song did large numbers on all the mixtape sites and quickly became a local favorite. LitGang then dropped their second hit single “FYM”, following with a video. In just a short time the song got huge buzz not only in the USA, but overseas as well. “FYM” reached over 27,000 YouTube views in just three days. LitGang has since dropped eight videos, including Rapper Dom’s solo video “Gangsta Shit”, and Yung O’s “2 Different People”.
What’s next for LitGang you ask? The highly-anticipated Mixtape “Now Not Later” dropping sometime in the Spring of 2017, as well as “Us Against Them Vol 4” hosted by LitGang.