Brazilian artist and producer, Nathi, moved to LA at the age of 17 to study music at Musicians Institute. Since graduating, the artist has released a single that she produced and cowritten with Alma Lake “What’s it gonna be” and has also released her debut Visual EP “Foreign”, written and produced by Nathi, which contains 4 songs and 4 music videos that all tie together in the Foreign Short Film. The Release Party was held at “The troubadour”

Nathi fell in love with music by playing classical piano at the age of 10, followed up by composing her own music, singing, playing guitar and becoming a female producer.

Nathi has began to work with 2x Grammy Award winner Timothy in her next album and single “Human” and also have scored two movies for Dame Dash (The List and Honor Up) with the direction of Timothy Bloom. 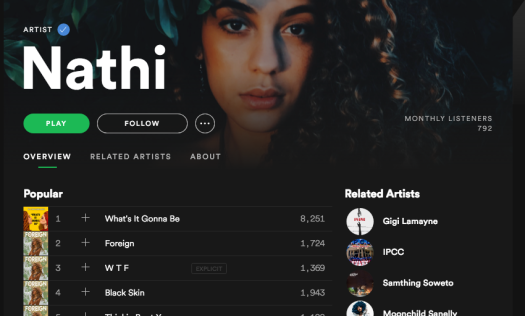 When and why did you start playing? My bestfriend Ladi Anne that was actually my roommate when I first moved to LA inspired me to learn piano since she played from the age of 7.
Which famous musicians do you admire? Why? My all time inspiration is Beyonce because of her hard work, consistency, vocal ability, performance and always giving 100% of herself in her art, very inspiring. I also grew up listening to a lot of Lauryn Hill and Amy Winehouse.
Were you influenced by old records & tapes? Which ones? I was raised listening to a lot of brazilian artists like Elis Regina, Tim Maia, Cazuza and got into american soul music later on like Whitney Houston, Donny Hathaway, Ray Charles and Al Green
Who are your favorite musicians? Groups? CD’s? In the aspect of musicianship I would say Nina Simone and Red Hot chilli Peppers
Have you been in competitions? Fleadh’s? Any prizes? I was the 2x finalist of my a big competition in Brazil called FICO. It was held in the of the biggest venues in São Paulo and there were about 7k people watching.
Do you perform in public? Describe those occasions? Concerts, radio, TV I perform a lot in LA in venues like The Mint, The Troubadour, House Of Blues, Por Vous and others. Personally, that is my favorite part of being an artist. Get to perform in front of real people, with a real band. it is when I express myself best.
What makes this kind of music “good” to you? Music in general has a very profound meaning to me, it will tell you more about me as a person than anything else. I believe music is an international language, you don’t have to understand the words to be moved by it.
Let’s Talk about your music and your last work… I released my debut Visual Album “Foreign” in July of 2017 and that was a big challenge for me since I wrote and produced the whole body of work. The purpose of the Foreign was to introduce myself to the music scene as a international female music artist and producer. It showcases a lot of sides of me as an artist and tied of to the visual aspect of it all, it tells my story. Im currently working on my next single right now called Human, which is also accompanied by visuals.
How do you feel about the internet in the music business? I think that the internet plays a big role in the music business, it gives us artists around the world a very accessible platform to showcase our art but at the same time, it can get very saturated with art and it’s easy to get lost in so much content.
What are the plans for the future? Looking forward to the release of my next single “Human” and to finish my upcoming Album, probably releasing in 2019. Also, im always looking for artist to produce as well
How has your music evolved since you first began playing music? My music evolves everyday. After I learned how to produce music, it was a big change that happened with my sound because I was able to experiment with different instruments and feelings. Also, throughout the years, my lyrics become more and more political.

Could you briefly describe the music-making process? My music making process is different everytime. It will depend on where I am, who I’m with and how i’m feeling. it could either start with a random melody that I have and record on my phone or with chords on the piano. I have woken up in the middle of the night to write lyrics in a piece of paper that just pops up in my dreams.