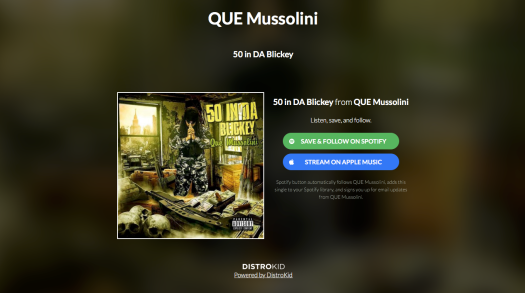 Hong Kong – IUU Music Group Asia and Geek Gang is thrilled to announce the release of the latest single from Que Mussolini, 50 In Da Blickey available on YouTube on March 27th 2018 as well as World Star Hip Hop (WSHH) on April 15th 2018.
50 In Da Blickey is a representation of an individual showing loyalty to their city and how they are willing to go the extra mile to protect the culture of a community that would potentially be neglected. Although Que Mussolini has reached a level in his Career that he no longer needs to physically run the streets he pays respect to All that he had to go through and all the times he had to take action.

When and why did you start playing?  I started in 1996, because I have a passion for music and I love to rap. It allows me to show my creativity.

Which famous musicians do you admire? Why? I admire 2 Pac, because his music is genuine and he speaks from his soul.

Were you influenced by old records & tapes? Which ones?  Yes, I like Nas “It ain’t hard to tell”; I was inspired by “Illmatic album”.

Have you been in competitions? Fleadh’s? Any prizes? Won 3 Rap Battles

What makes this kind of music “good” to you? Rap, R&B, Techno and Trap are forms of music that make me feel good because it creates emotion.

Let’s Talk about your music and your last work… I have 2 singles set to release, “50 In Da Blickey” for May 26th and “Diamonds in My Denim” for June 22nd. “Diamonds in my Denim” was inspired to shed light on the FD clothing line. “50 In Da Blickey”, is a representation of an individual showing loyalty to their city and how they are willing to go the extra mile to protect the culture of a community that would potentially be neglected.

What are the plans for the future? My Plan is to go Platinum with the Diamonds in my Denim record with the help of my friends and business colleagues. Then I’ll use the proceeds to open community centers in the low-income areas and help as many homeless people as possible. I will provide opportunities for those less fortunate.