Bizeeee or “4eZ” as he is called, is at it again in the kitchen, after his most recent release of the self entitled project “4eZ”. He brings you the first exciting, and energy packed track single, from his album, entitiled “Couple Bands Up In The Gucci Bag” the track itself is a mixture of slow smoking flows and renaissance art with a tad of the greatest seasoning available to the ears.

Biz sounds like no other artist out, and tends to switch his flows depending what the beat tells him, and how he feels at that current mind state. Biz is also one of the dopest audio engineers coming out of Virginia, he is also a hot, vivid, savy, photographer, in the Atlanta Metro area. He is currently working with Money Man’s street based label, Black Circle, and producer based studio called Bndwth. Biz has many celebrity clients, and credits such as BCShooter, BCGutta, WillPower, Josh Waters, Future, Young Thug, Mike Epps, Casino, Ti, and alot more. 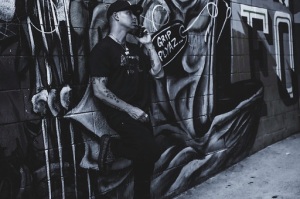 Be looking for the “4eZ” album early next year, and The Ep “The Dark KinG” this winter, we won’t ruin the suprise, but the album itself will have a few features from some of industries top current artists. Bizeeee is a artist to be watching all the end of this year and 2020.

When and why did you start recording?

I started recording about seven, or eight years ago, in Virginia, I had bought my own studio equipment, with what money I had, not knowing a thing about music, and with no help from anyone, I just had a dream, and a idea, that I could make it work.

Which famous musicians do you admire? Why?

I love Kurt Cobain, Jonnie Cash, The Wu-Tang, Motley Crue, Megadeath,TooL, Notorious BiG, 2Pac, Led Zeppelin, Rage Against The Machine, The Pharcyde, 311, and many more, I love most of these bands, and groups, because the sound was original, and timeless, too many people’s sound is alike these days, and that is the problem with today’s music.

I definitely was influenced by old records and tapes. Some of the most influential ones were, The Purple Tape, Wu Tang Forever, Smells like teen spirit, Life after Death, Apocalypse Now, Life After Death, Guns N Roses, and a lot more.

What drives you to be so successful?

I would say the legacy of leaving something dope for the new age, and also, it’s therapy for me, music is art, it allows me to transform my feelings, into a project I can touch, weather it be photography, painting, mixing, mastering, or recording.

How did you get the name “Bizeeee” aka 4eZ?

When I was young, growing up in Charlottesville, and Richmond Va, Some of my click would say, I was always busy doing stuff from work, to being in and out the streets, with anything that had to do with getting money, to be honest. I started doing creative stuff, I needed a artist name, so Bizeeee,  just stuck, I use to spray graffiti, and knew I didn’t want to spell it the normal way, so it just came to be spelled Bizeeee, with four e’s, later on in life, I started to do radio, and people would say Bizeeee, don’t forget the 4 e’s. So when my music changed up, and being in a different part of my life, I started using 4eZ, as a alias artist name. It only seemed right to do that.

Why did you choose to play this kind of music?

The streets have always been in my heart, and I’ve always been poetic, and being that I got caught up in them at a younger age. My music portrays stuff I’ve been through, or issues that I’ve had, or have, things I like, and own also just anything relative to my life.

I just dropped “Bands Up In The Gucci Bag”, available everywhere music is sold. I’m excited about the new Ep on the way as well. I feel it’s my best body of work so far and I think the fans will love it too, a lots to come as you know I don’t just do music in the field, I feel as if thats so limiting as a artist and you never know where inspiration will take you. I’m currently working with some big names in the business and I am excited about some of our projects about to come out, the end of this year and the coming year. My advice to other artists trying to get there name out there is don’t listen to anything but your heart.

I love it, it’s opened a lot of doors for people like myself, and a lot more. Without the internet, the music industry, wouldn’t even exist. It’s gone all the way to the internet now, and it’s great to give people opportunities, to be who they wanna be, and maybe even become something, they could only dream about before.

My plans for the future are to keep making my legacy, and creating dope stuff through photography, painting, recording and mixing and mastering. To continue to be Biz and be a inspiration, for people from my hometown, state, and all around the world.

Could you briefly describe the music-making process?

My recording process is a little different, I don’t write anything, I put the beat on, and then let the words come out, how the beat makes me feel, it’s basically free styling, in front of the microphone, and a technique called “punching in” using Protools. I use to write more, but it’s so much easier to just record this way now for me.

Who have you worked with?

To just say a few, Black Circle, Future, Mike Epps, Scooter, ThuG, Ti, French Montana, Diamond, Kontraversy, Casino, Migos, WillPower, and more! I’m currently working with Black Circle who has become like family to me, and producer base studio, Bndwth which has also become a home for me.