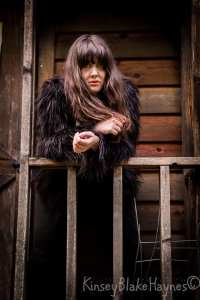 Alabama Rose is an emerging rock & roll artist from Birmingham, AL. Described as “Wanda Jackson fronts Ramones” her music blends elements of surf, soul, blues and old-west twang to create modern music with a vintage twist. Rose’s voice is dark and powerful in a way that hasn’t been heard since Janis Joplin and Ann Wilson topped the charts. Quickly garnering a reputation for her energetic live performances and live studio recordings, Rose is an artist to keep your eyes on in 2019.

When and why did you start playing? I don’t think I’ve ever NOT been musically inclined. Some kids gets into sports or gymnastics, music was my thing. I started writing songs when I was really young, probably 7 or so, maybe younger. I didn’t really know what I was doing but I wrote anyway. It was therapy for me. I had a rough childhood and writing music was the thing that kept me sane. The first time I performed a song I wrote was when i was like, 9 or 10 I guess, at a church youth camp. Me, my sister and a friend of ours sang an acapella version of this little Christian song I wrote during parent’s night. It was weird but super exciting. When I started playing drums at 11 or so, I started to connect more dots and figured that I could make some noise with the lyrics and melodies I wrote. I never stopped after that.
Which famous musicians do you admire? Why? Honestly, the ones I love the most are the icons who helped make music history, who came from dirt poor backgrounds. These days, anyone with money can make music and get it heard, no matter if it’s good. I think live performances help clear some of the garbage, but those icons, man, that was authentic. When you listen to Aretha Franklin and Etta James, Ray Charles, James Brown, those iconic classic soul singers, and the folks who created blues and rock & roll music, you hear their whole souls. To me, you can’t get any better than that. Show me the raw stuff, without all the frills. That’s real talent.
Do you perform in public? Describe those occasions? Concerts, radio, TV. I do. My next tour is through the whole state of Florida, starting in Mobile, AL in November. I’ve played from North Carolina to Texas so far, have done several festivals, live radio, have a few singles on radio rotation in the Southeast, etc. Next year, I’m kicking my touring up a lot and hoping to be on some great festival lineups as well.

Why did you choose to play this kind of music – One of the things I like about myself as an artist is how versatile I am musically. I’m sitting on a lot of different stuff, and the songs I’ve released are pretty expansive in styles. Rock & roll is pretty vauge as a genre and I think everything I do fits into that really expansive box…so far. Who knows, maybe I’ll go full Bjork one day, or make some sort of electronic music. I’m really principled in not wanting to limit myself and tell people “this is what I do, I’m sticking with this”. In my heart I’m a blues musician and that influences pretty much everything in some way.
How do you feel about the internet in the music business? I think I’m still figuring that out, like a lot of other artists. Everything has changed and is continuing to change. You’ve got streaming services popping up and becoming a standard part of what makes a packaged artist. There’s an infinite amout of other artists popping up and releasing music, which makes it a bigger world with more competition. Then again, your potential audience is immeasurable in an instant, which sort of makes the world that much smaller. I’m still learning and trying to keep an ear to the ground regarding what the industry is doing. I’m really thankful to have a team that helps me navigate this stuff now because it can be pretty overwhelming at times.
How has your music evolved since you first began playing music? Haha, I’d be super embarassed to share some of my early stuff. I think most artists would be though. Emotionally, I used to write as a kid about, I guess, the pain and loneliness I felt growing up in a divided family, having my biological father disappear, my mom’s illnesses, just the tough stuff I experienced I guess. I still mostly write about my experiences and things that have a strong impact on me, but I try to be more clever about it. I’m trying to figure out ways to say things without coming right out and saying it, to be more open to interpretation.

Could you briefly describe the music-making process? It varies for me. It’s always really personal and private for me though. Sometimes I might hear a string of notes in another song and my brain goes off on its own with a different melody and throws some lyrics in there. Because I’m also a drummer, my lyrics are often really percussive, so a lot of the rhythms I come up with are embedded right in the vocal melody. Sometimes I’ll be in the shower, singing something random and the pieces jump out at me. I’ll jump right out of the shower and record it on my phone so I can keep working on it. I’ve had it happen in my sleep too. I feel like often times artists are a conduit for something else. It’s just uncanny how things pop into your head at times.

After that, I go through draft after draft, polishing and trying to get a cohesive message across, filling in the way I hear each instrument, etc. I take that to my producer and he and I hash it out til we’re pleased. We record it live, mix and master it, and then it’s time for the rest of the work to begin. A lot goes into making and releasing music.

What are your goals as an artist? On both a small and large scale, I want to impact people and make a difference. I feel a strong urge to make the world a better place, whether it’s for an individual or a group of people. It feels like it’s a personal mission to spread my music to as many people as possible, so I can build my platform and make a bigger difference for people. I’d love to see myself building schools for children around the world, helping people who are suffering from illnesses, whatever I can do. Music is the vehicle I want to us to become a person who makes a strong, positive impact on the world.

Do you have any advice for other artists out there who are just getting started? Never stop playing. It doesn’t matter if you’re from a tiny, podunk town with no other musicians around, there’s always a way to make music and find other people to work with, so don’t get discouraged. And also, be patient with yourself. You’re not in a race with other people.. Don’t waste time comparing your accomplishments to other people. Just keep making your own way no matter what obstacles you come across. It’ll pay off, I promise.