An Old Friend is an upcoming Alternative Rock band based out of Long Island, New York, they have been said to be significantly ahead of most contemporary peers in their stylistic niche; they show an ability to stray from the norm and focus on truly innovative fragments, as opposed to one linear hook yearning for radioplay. Founded in 2011 An Old Friend continue a career of sustained excellence, the new 6-track EP, “I am, I was”, bursts out of your speakers and infects your heart and mind like few other modern-day recordings.

Not only is the production quality of the music at an excellent level, but the variety and maturity of each of the songs contained in this recording reaches for stratospheric heights — and most of the time achieves that goal. 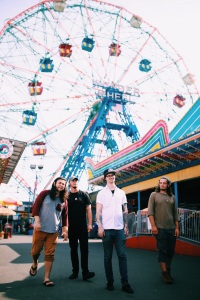 The ferocious strategy of members Eddy Barrera (Guitar/Vocals), Brett Heller (Bass/Vocals), Cody Kohler (Guitar/ Lead vocals) and Frank Facompre (Drums) for winning over new fans one at a time, sears through in their songs, simultaneously delivered with burning twin-guitar fury and Cody Kohler’s emotional vocals. Those who aren’t moved by his frequently extraordinary wails just aren’t listening.
No song sums up the group’s sound better than the first song released from the EP, the single, “They Feed On Me At Night”. It slowly crawls out of the box before bursting into a sprawling explosion before quickly settling into a throbbing drum & bass background for Kohler’s vocal gymnastics.
It’s a piece of music that holds you by the throat and by the heart at the same time, flexing emotional muscles few bands can produce, let alone sustain. It’s the sound of a band that knows who they are, yet never settles for a simple status quo.
The “I am, I was” EP is a perfect blend of all the band’s musical and lyrical embodiments, littered with enough roller-coasting nuance to keep you on the edge of your seat all the way through.
Whether it is the enduring chorus of “Meeting The Fox” or the heartbreaking hook of “Lady” there is an irrefutable confidence behind every bridge, verse, and refrain found on “I am, I was”. Heavy, highbrow, and infectious as ever, this is alternative rock as it was always meant to be.