After fuelling countless club nights with his high-energy mashups of iconic tracks and amassing tens of millions of plays from his previous compilation projects, Jaymee Franchina’s defining moment arrives today, with his debut single, “Next to Mine ft. Alina Renae”.
The first tantalising taste of his highly-anticipated solo project is bound leave listeners under his spell. The honey-smooth vocals of Chicago sensation, Alina Renae ooze seductively over Franchina’s unmistakable production, combining forces to create a tune you’ll have stuck on repeat, play after play. The track is lifted from his forthcoming debut album, confirmed to showcase 13 unique feature artists from around the globe.
The arrival of “Next to Mine” confirms Franchina’s position as one of Australia’s brightest young talents, ready to align himself with the world’s best. He’s amassed 100+ million plays across streaming platforms with his “B.I.G. Flume” & other mashup compilation projects, scored multiple online features including BuzzFeed & Teen Vogue, & rubbed shoulders on stage with Flume, Foals, A$AP Ferg & more… & he’s only getting started. 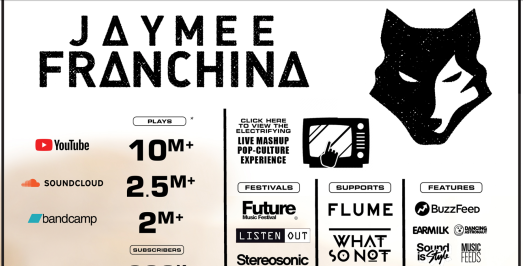